I sat with a little boy today and it went like this:

Me: “Let’s practice stretching out some words. I’m writing about dogs. Help me stretch out the word dog. D–ooooo-g”

And it continued on from there. Sigh.

Aside from a lot of silliness involving “Turtle-cat,” I was reminded today that many of our kindergarteners need a lot of support with phonemic awareness. When we ask kids to “stretch out a word and say the sounds,” a lot of them have no idea how to do that, yet we often gloss over the “stretching out” part and emphasize the part where we “find a letter that makes that sound.”

Phonemic awareness is being able to hear the smallest units of sound (phonemes), or individual sounds in words. It’s being able to segment “dog” into /d/o/g.  (In case you were wondering, after much playing around with words, my kindergarten friend above was not yet ready to segment the sounds in “dog.”)

Put simply, phonics has to do with knowing which letter or group of letters correlate with the sounds. Occasionally, adults assume there is no need to do much phonological or phonemic awareness work if kids know a lot of letter names and letter sounds. However, contrary to that belief, many kids know letter names, and know a sound for each letter (phonics), but actually do still have trouble hearing and manipulating individual sounds in words (phonemic awareness).

How do I know if kids need help with phonemic awareness?

Many schools give an assessment to all kindergarteners, such as the PASS, or Marie Clay’s ‘Hearing and Recording Sounds in Words’ assessments. If your school doesn’t use something like this, you might informally assess during word study, or writing workshop by asking students to stretch out words, clap out syllables, and manipulate words in different ways. The great thing about these assessments are that the same activities that assess are often activities that also help teach!

Leaving Out A Sound

Try playing with words by asking children to take out parts. Start with leaving out syllables, and move on to leaving out an initial or ending sound. Just say the words aloud to work on phonemic awareness–don’t write them unless you want to also work on phonics.

Elkonin boxes (or “sound boxes” as they are commonly called) are a helpful tool for teaching children how to identify and segment each phoneme (separate sound) they hear.

Start by making the boxes. Here are what Elkonin boxes for CVC (consonant, vowel, consonant) words look like. One box for each sound: 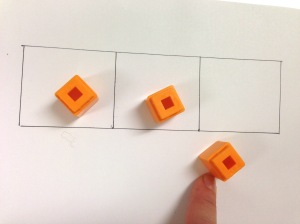 Then demonstrate saying the word slowly, and pushing a counter into a square for each sound (a coin, a unifix cube, tile, or any small object will do). Don’t write any letters unless you want to also work on phonics. Then give the kiddos a turn! Use the words “beginning sound” “middle sound” and “ending sound” consistently. For many kids, the concept of the “beginning” sound will be completely new.

Literacy Coach, Consultant, Author, Graduate Course Instructor, and Mom. Passionate about fostering a love of reading and writing in learners of all ages.

Reading + Talk + Writing = Innovative Expression Opportunities
A topsy turvy year brings with it surprises. Some have been valuable enough to carry forward. I'm looking forward to bringing the best of the year with me and letting the challenges become a memory.
In this topsy-turvy year, when I was not expecting to teach a remote kindergarten class, I was also not expecting to discover strategies for upping my feedback game with writers—strategies that I plan to continue using once the world has righted itself and workshop is in-person again. LINK IN BIO. #TWTBlog #remoteteaching #virtuallearning #teachersofinstagram #teachersfollowteachers #teachersofig #teacherappreciationweek #newteachers #newteacheradvice #kindergarten #kindergartenteacher
As the 2020-21 school year progressed, some teachers reported improved one-to-one conferences when they were conducted through a screen. As students and teachers became more comfortable sharing their screens and recording videos, virtual conferences felt more natural. There are some aspects of virtual writing conferences that can be carried forward once everyone is back to school in-person 100% of the time and/or the masks get to come off indefinitely. LINK IN BIO. #TWTBlog #conferring #writingconference #remotelearning #remoteteaching #virtuallearning #facetofaceteaching #teachersofinstagram #teachersfollowteachers #teachersofig #teacherappreciationweek #newteachers #newteacheradvice