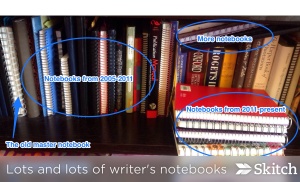 I opened Evernote and created a new notebook called “writer’s notebook.”  Then, I read through my old notebooks in search of my favorite entries.  I photographed writer’s notebook entries using the document camera feature in Evernote.  Next, I applied tags to each entry based on the audience I could share it with (i.e., elementary school, middle school, adult audience, or general).  I also added tags like “boxes and bullets,” “graphic organizer,” “literary essay,” “poetry,” and “writing exercise.”  This gives me a variety of ways to search for entries when I need them.

Here’s a peek at how it looks on my Evernote Desktop:

And this is how the “writer’s notebook” notebook looks on my iPad:

It’ll take me awhile to go through all of my notebooks to put everything I need into Evernote.   But for now, I have a master writer’s notebook in Evernote, which means I can access my notebook writing on my iPhone, on my iPad, and from my computer.  Now I can bring my iPad into a classroom and confer with student writers.  I don’t have to worry about bringing several writer’s notebooks with me since everything is in one place.  All I have to do is open the “writer’s notebook” notebook in Evernote or do a keyword search for a given entry.  Then I can show a student a writer’s notebook entry during a writing conference.  I can also e-mail it to someone  if the student needs or wants to use it as a mentor.

Finally, I want to give a hat tip to Mary Bellavance, Susan Dee, Deb Frazier, Katie Keier, Cathy Mere, and Karen Terlecky. These ladies led an incredible round table session at NCTE, which had me thinking about digital tools for the past two months. Thank you for the inspiration!

I am a literacy consultant who focuses on writing workshop. I've been working with K-6 teachers and students since 2009. Prior to that, I was a fourth and fifth-grade teacher in New York City and Rhode Island.

I live in Central Pennsylvania with my husband and children. In my free time, I enjoy swimming, doing Pilates, cooking, baking, making ice cream, and reading novels.

Many of today’s students crave choice, freedom, and the excitement of exploring something new. This year, as you prepare to roll out your writing units, you may also want to reconsider the level of constraints within each unit. How and when might you invite students to choose the product that best fits their personal preference and intended audience?
ICYMI: Today's post is a roundup of all the posts in our August blog series as well as the announcement of our giveaway winner!
Let’s think about pens vs. pencils in writing workshop.
It’s crucial to match the feedback we give students to our intent.