A handwritten, digital writer’s notebook never crossed my mind ’til I read Cathy Mere’s Sharing Our Notebooks post this past summer.  Her post inspired me to buy a stylus to try using my iPad as a writer’s notebook since I had become guilty of not carrying my writer’s notebook around anymore.  (My notebook use changed after I bought an iPhone in late 2011 since I began using the Notes feature on my iPhone for jottings. Further, I started snapping pictures of things I wanted to write about later.) Lucky for me, I won the notebook app pack Cathy and Amy Ludwig Vanderwater gave away. Once I was gifted with a variety of apps, I began using them to figure out which one was right for me.

I tried out Day One, which I liked as a journaling app. However, I was really looking for an app in which I could physically write into. Knowing Cathy had used Noteshelf with a stylus, I turned my attention to that app next.

Noteshelf allows me to create a variety of notebooks, which can be customized with different covers and paper styles. One can also play with different different ink colors and pen types when writing.  Once I got the wrist protection set up properly, I was able to write with greater ease.  While my handwriting isn’t as neat as I would like it to be, I believe that’s the fault of my stylus, rather than the fault of the app.  (I have my eye on a Jot Script Stylus, but I haven’t been able to justify the $75 price tag yet.)

While I’d like to say writing on my iPad feels just like writing on paper, it doesn’t.  I still love the feel of crafting prose inside a physical writer’s notebook. However, it helps to have one less thing to schlep with me on overnight trips or to a medical appointment. The iPad is think and my stylus doubles as a pen.

Take a look at a few pages from some of my Noteshelf notebooks:

Not only am I working on my writing in my notebooks, but I’m also using Noteshelf to create lists. I have a notebook for TWT where I jot down things related to this blog that I need to hand-write rather than type into an Evernote note. For instance, I crafted an agenda for our TWT Author Google Hangout, which happened last night. 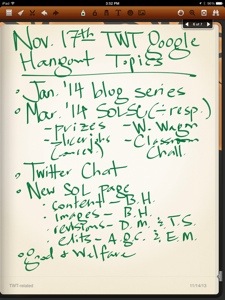 I had dabbled with Penultimate a few days after I began using Noteshelf. While I liked the fact it automatically synched with Evernote, I had issues with stray marks appearing on my Penultimate pages even after turning off the multitasking gestures on my iPad.  Plus, I didn’t like the look of the notebooks or the pen styles as much.

My relationship with Penultimate changed when I woke up at 4:00 a.m. on November 10th. I had a brilliant idea for a picture book I had been thinking about for the past 15 months. I needed to get it down on paper, but wasn’t tempted to sit at the computer in what felt like the middle of the night. Therefore, I rushed downstairs to the couch I bought after graduating from college, grabbed my favorite blanket, a glass of orange juice, my stylus, and my iPad.  I opened Noteshelf and paused. What would happen if I drafted the manuscript in Noteshelf and lost it? With the words for the manuscript ready to burst out of my head, I opened up Penultimate and began writing since I knew it would save into my Evernote.

NOTE: Last week I checked the export features in Noteshelf and found out one can export a notebook to Evernote. However, it exports as a PDF, which means you have to download it in order to see it in an Evernote note.

After spending the past couple of months learning how to use a few different apps as writer’s notebooks, I find myself asking myself “Noteshelf or Penultimate?” as if I have to pick one.  Realistically, I don’t since I can continue to use both of them.  Both apps provide me the ability to embed photos into my notebooks and give me a variety of ways to share my writing with others. Even though I like the look and feel of Noteshelf (above, left) better, I love the way Penultimate notebooks become searchable in Evernote. (For instance, I used the word footbridge in my manuscript. I typed footbridge into my Evernote search bar on my home computer and my manuscript just popped up.  How’s that for convenience?) If I decide to eventually pick one, that functionality alone might help Penultimate beat out Noteshelf.

Finally, the jury is still out on Super Note, which was one of the apps I received from Cathy.  I spent so much with Day One, Noteshelf, and Penultimate that I haven’t tried it out yet.  Cathy uses Super Note for keeping lists of writing ideas. At this time, I use Evernote for that purpose. However, I intend to try out Super Note going-forward since I have a feeling, just from reading app’s the welcome message, it has a lot to offer.

Have you considered trying out an app in lieu of an actual writer’s notebook? If yes, what do you use?  If no, would you consider it going-forward?  If so, what kinds of things must-haves does an app need to have in order for you to try it?

I am a literacy consultant who focuses on writing workshop. I've been working with K-6 teachers and students since 2009. Prior to that, I was a fourth and fifth-grade teacher in New York City and Rhode Island. I'm the author of Craft Moves (Stenhouse Publishers, 2016) and the co-author of Jump Into Writing (Zaner-Bloser, 2021), Welcome to Writing Workshop (Stenhouse Publishers, 2019), and Day By Day (Stenhouse, 2010). I live in Central Pennsylvania with my husband and children. In my free time, I enjoy swimming, doing Pilates, cooking, baking, making ice cream, and reading novels. View all posts by Stacey Shubitz

The Importance of Paper: A Tip for Tomorrow from Stacey - Two Writing Teachers Podcast