My uncle passed away on September 3rd, 2017 after an eight-month battle with cancer. I knew the end was near when he was admitted to hospice in late August. I wasn’t sure what to do when I heard the news the end was near so I sat down at my computer and wrote.

I began writing a eulogy – one of four that would be delivered at his September funeral – a few days before he passed away. I started recording some basic facts I knew about my uncle. But the more I typed, the more I felt as though I was merely listing his professional and personal accomplishments. His eulogy started to read more like an obituary, rather than a celebration of his life. Rereading it made me nauseous. Therefore, I did what 21st century writers do. I hit control-A, followed by control-X, so I could start over with a blank page.

After a few minutes of starting at a cursor flashing on the white screen, I heard my former professor’s voice (i.e., Lucy Calkins). I recall Lucy saying something like, “Don’t write anybody’s words. Write the words that are precisely your own.” I didn’t want to write the words anyone who knew my uncle could write. Instead, I wanted to capture him with words only I could say.

I gave myself 30 minutes to flash-draft the eulogy. I emailed it to my dad and wrote, “Please let me know what you think. Thoughts, comments, and suggestions are welcome.” I did this because I knew the words I wrote didn’t make for a traditional eulogy. Therefore, I didn’t want to upset my father – whose brother was passing away far too early – if I had written something too untraditional. A few hours after I sent the flash draft to my Dad, I received a note back from him telling me it looked fine.

It took me a few days to write words that could only come from me – my uncle’s only niece – and nobody else. After a couple days of tinkering, I found what I thought were the right words.  Did it flow as smoothly as I had hoped? No. However, it was a eulogy, not a book. I didn’t have months to revise. Therefore, the day before the funeral, I printed it out and practiced it in an effort to get through it without crying. (All the practice was futile since I cried when I reached the end of it at the funeral.)

On the drive home from the cemetery, I had time to think about my writing process. While my eulogy may have been more lighthearted than the rest (e.g., Click here to read my mom’s eulogy of my uncle.) I think it my words were important. They allowed me to express my love for a person who mattered greatly to me. It was far from the best thing I’ve ever written, but it was something that could have only been written by me. And this made me think, regardless of the genre, one of the most important things we can teach young writers to do is to write words that could come from them – and only them.

One of the hardest things we teach students to do is to write with voice. Writing with voice allows readers the ability to feel the writer coming through. It’s about engaging with the reader, individual expression, tone, commitment, and the way the writing fits with the audience and purpose (Education Northwest, 2014, 5-6). Perhaps one of the ways we can help our students write with voice is to help them realize they must write words that could only be written by them, and them alone. 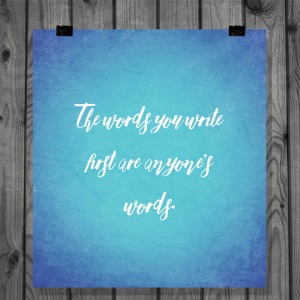 I am a literacy consultant who focuses on writing workshop. I've been working with K-6 teachers and students since 2009. Prior to that, I was a fourth and fifth-grade teacher in New York City and Rhode Island.

I live in Central Pennsylvania with my husband and children. In my free time, I enjoy swimming, doing Pilates, cooking, baking, making ice cream, and reading novels.

ICYMI: Today's post is a roundup of all the posts in our August blog series as well as the announcement of our giveaway winner!
Let’s think about pens vs. pencils in writing workshop.
It’s crucial to match the feedback we give students to our intent.
I used to write on my students’ writing. NOW I believe if I’m the person writing down what I think a child should write, then I remove lots of that child’s agency. LINK TO BLOG SERIES IN BIO. #TWTBlog #writingworkshop #learning #school #teach #teachergram #teacherlife #teachersfollowteachers #teachersofinstagram #teachersofig #teachersofinsta #teacherstuff #teacherblogger #teachertips #teachersofthegram #newteacher #newteacheradvice #newteachertips