My review basket of books was overflowing earlier this month. (Yes, I realize this is a good problem to have.) Therefore, I set aside an evening to just read picture books. Do you know how wonderful that was?

It’s not like I don’t spend time reading picture books. I read them multiple times a day to my daughter. However, there’s something incredible about discovering a picture book — by ADULT self — for the first time!

What follows in this post are five new favorites, some of which debut this months some of which came out a few months ago.  Regardless, they’re all gems and you’ll want to have copies of them for your classroom and/or personal library.

Speaking of copies of them, five publishers are giving away the books mentioned below. Be sure to leave a comment on this post if you’d like a chance to win one of these five books.

(1)  At the Same Moment, Around the World by Clotilde Perrin (Chronicle Books) — Have you ever wondered what other people are doing in other parts of the world when you’re, say, listening to a song as you ride in the car? Ever since I was a child, I’ve always wondered what other people were doing in other cities. Perrin’s book seeks to provide answers to what is happening around the globe at the same moment.  This book will spark a sense of amazement in children, which will make it an enticing way to teach about time zones. I believe this book will lead children to do some fierce wonderings about what others are doing after reading this book. At the Same Moment, Around the World can serve as a topic choice mentor to children who can create stories about characters living in different places doing the different things at the same time.
The book begins at the Greenwich meridian moving from day to night. (FIRST PAGE TEXT: “It is six o’clock in the morning in Dakar, Senegal. Keita wakes up early to help his father count the fish caught durnig the night.)  Each page of the book describes what a child is doing in each of the original 24 time zones.  (OTHER PAGES: “At the same moment, in Shanghai, China, it is two o’clock in the afternoon, and Chen practices for the Lunar New Year parade.” “At the same moment, in Lima, Peru, it is one o’clock in the morning when baby Diego is born!”)
The final two pages of the book teach readers about time zones providing them with information about early timekeeping and accurate time keeping.  Furthermore, there’s an exquisite world map that folds out at the back of the book.  The map of the pictures each of the characters from the book, names them, the city they live in, and draws a line to where their geographic location (e.g., Kiana and Allen from Honolulu points to a palm tree on Hawaii while Nadia from the United Arab Emirates points to tall buildings in Dubai).

(2)  Count 123 on the Subway written by Paul DuBois Jacobs and Jennifer Swender, illustrated by Dan Yaccarino (Alfred A. Knopf Books for Young Readers) — The New Yorker in me wanted to review this book since it’s about the Subway. (In case you’re wondering, I rode the 6 train between work and home.) The mother of a toddler in me appreciated this book since it counted up to ten and back down to one, which is hard to find in a counting book (most just count up).  The writing teacher in me wanted to share this book with you since it has a great rhythm (i.e., it’s a rhyming text) that uses specific words to help readers feel as if they’re underground hearing the screeches and feeling the rumbles of the subway.
I was guilty of reading the book without realizing that it was Dan Yaccarino of Doug Unplugged who was the illustrator.  A few pages in, I recognized his playful style, which fits the text perfectly.
Seeing as the school year is winding down, I know many of you might be gearing-up for independent writing projects. If you have students who want to write and illustrate picture books that deal with basic concepts (e.g., counting, shapes, letters), this is an excellent mentor text to have in their pile.

(3)  Edgar’s Second Word by Audrey Vernick and Priscilla Burris (Clarion Books) — There are so many books out there about waiting for a sibling to arrive and what happens after a baby is born.  Well, this is a touching new take on what it’s like to be a big sibling.
Hazel is elated to become a big sister. Once he arrives she likens him to a pillow and a watermelon since he doesn’t do much of anything. She dreams of reading to her little brother, Edgar, but he seemed uninterested at first “Like a pointing, grunting watermelon.” Once Edgar finally spoke, his first word was no. In fact, he was a “NO-shouting boy,” which frustrated Hazel to no end. But Hazel persisted and kept reading to him, which led to his second word.  I won’t spoil the ending, but let me just tell you, it’ll melt your heart.  In fact, I think it’ll melt most kids’ hearts. Therefore, this is a great book to showcase when you’re teaching satisfying endings to your students.
Both Edgar and Hazel are strong characters. Any unit that requires well-developed characters would benefit from studying these two closely.  In addition, Edgar’s Second Word can also be used to teach students about balancing the parts of a story (i.e., giving different amounts of weight to different parts), using specific details, and creating a turning point.
Finally, if you know of a child who is becoming a big sister or brother, this is a great present to bring over for them after their baby sibling arrives. 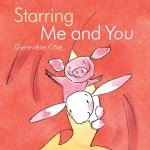 (4)  Starring Me and You by Geneviève Côté (Kids Can Press) — Piggy and Bunny have been best friends ever since Me and You was published in 2009.  This new installment in the series by Côté shows young children how to play together despite wanting to be the star of the show. (Something that is quite hard for many children to learn!)  The book ends with the characters engaged in an apology of action where they make amends for their behavior and move on with the show.
Piggy and Bunny are strong characters each of whom express the same emotions in different ways (e.g., Bunny hides when he feels shy while Piggy fakes a smile). This book can be helpful for having kids create strong characters. In addition, the text and illustrations can be studied to help young writers think about how to create compassion among characters as they’re writing.

(5)  The Baby Tree by Sophie Blackall (Nancy Paulsen Books) — This may not be a text you’re going to keep in the mentor text basket of your classroom library, but it is a book you should own!  Why? Because one day you’re going to be faced with a child who wants to know where babies come from!  And if you have Blackall’s new book in your possession, you will be armed to answer that age-old question with honesty and strength.
Now, if you teach in the kind of place where conversations about the birds and the bees aren’t verboten, you must consider placing a copy of The Baby Tree in your classroom. It is expertly crafted for young children and features illustrations that are both tender and realistic! (NOTE: When I taught fourth grade, I read Breasts by Genichiro Yagyu aloud to the girls when we split up into the girls and boys sections for the puberty talk with the school nurse. As you can imagine, The Baby Tree‘s subject matter doesn’t scare me.)  The Baby Tree has dialogue, internal thinking, precise words, punctuation that creates voice, strong characters, and an excellent structure. It’s also got the kind of ending that is sure to put a smile on your face, rather than making you feel awkward about the conversation that will follow. Finally, there’s a one-page Q&A that will help even the most reticent among us prepare for the “Where do babies come from?” conversation.
GIVEAWAY INFORMATION:

Thanks to everyone who left a comment on this post. I used a random number generator to pick out five winners. Then, whenever I could, I tried to match someone up with a book they mentioned.  The winners of the books are:

At the Same Moment, Around the World by Clotilde Perrin will go to travelinma.

Count 123 on the Subway written by Paul DuBois Jacobs and Jennifer Swender, illustrated by Dan Yaccarino will be sent to Katie.

Edgar’s Second Word by Audrey Vernick and Priscilla Burris will be for Lisa Keeler.

Starring Me and You by Geneviève Côté will be mailed to Jeanne Wright.

The Baby Tree by Sophie Blackall will be heading to jbmiller73.