In my writing workshop: a student takes ownership

Tucked away among  the many books I bought at NCTE is this treasure: 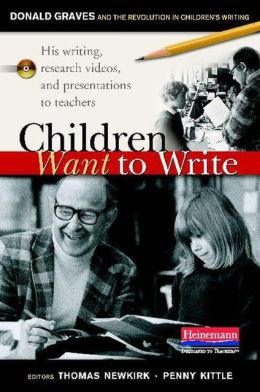 a collection of Donald Graves’ essays on writing workshop.  An added bonus is a DVD that captures footage of  Don and his team of teacher/researchers in action during the Atkinson study.  I’m making slow but sure progress through the book, mostly because I have been stuck on a key video from chapter 2 where a student, Debbie Nichols, describes the importance of owning her own story – of being “the mother of the story.”  Debbie has such fierce conviction in this ownership, it is her story, and she means to tell it her way.  Thomas Newkirk, co-editor of Children Want to Write,  explains how this sense of ownership was encouraged and cultivated:

“Ownership  was more about the relationship a student had to writing, the sense that it was not about fulfilling a task imposed from the outside; rather it was about investing in a project that had personal meaning.  It was shifting from the role of student to the role of writer.  It was not about a grade but about creating meaning.”

Sometimes, students take to this idea of ownership readily (Debbie Nichols seems like a kid who knew her story!) and sometimes they discover this ownership  slowly…as in the case of my student, Matt.

Writing Workshop got off to a rough start for Matt.  In the early days, he’d spend a lot of time gazing out the window, chin resting on his desk, the pages of his writer’s notebook fluttering idly in the September breeze.  He didn’t speak much during our conferences, and I often felt very discouraged – would our writing year together be filled with mostly empty pages, one sided conferences (“how’s it going?” …shrug…”what are you working on?” …shrug…),  unending frustration?

September gave way to October, and sometime during those golden Fall days, I began to notice that Matt was actually writing more, much more.  Although our conferences were only marginally more communicative (“how’s it going, Matt?” “Uh, okay, I guess..”…shrug..) his writer’s notebook began to look as worn and used as his classmates’, and he was working intently (even enthusiastically) on his memoir.

And, through his writing, I began to get to know a bit about this quiet boy, as well: that his parents were recently divorced, that there were new families to adjust to, and new routines and ways of being to learn. From observing him, I began to see that there was turmoil burbling under his placid demeanor.   Every once in a while, that turmoil would flash through his writing – an angry scene, sad words, a hopeless tone.

He was careful in choosing his memoir topic,  however, opting for one that was “safe” from a long  and varied list.  As Matt drafted and revised his memoir, he continued to edit out scenes and dialogue that hinted at conflict or trouble.  He wrote well, but the writing lacked a certain authenticity – it lacked his voice.

Then it came time for our Thanksgiving story slice of life.  I had asked my kids to “listen as writers” at the Thanksgiving table. What family stories and traditions did they learn about? Which relative or family friend did they discover anew?  What conversations drew them in or piqued their curiosity?  Take your writer’s notebooks home, I had said, see what you can capture.

When we returned, Matt worked hard on his slice, and I noticed that there was something different about the way in which he went about this writing task.  There was less erasing and scratching out, he seemed more sure of what he wanted to say.  “Can we conference?” he’d  asked the day before we were to share. “You bet!” I’d responded, happy as always, to be invited into a student’s writing process.  The content astonished me – it was personal, deeply felt, raw…and beautifully written.

Thanksgiving had not gone as he’d expected. In the shuffle between new family ties  and old broken ones, Matt had faced disappointment.

I wanted to ask Matt if he was sure he wished to share this slice, but something held me back.  He seemed sure of this piece of writing – very sure. On the day of our writing celebration (just to be sure), I announced that it was perfectly okay to take a “pass” on the opportunity to share.  Matt looked me right in the eye, picked up his notebook, and found a spot in our writing circle. He was ready.

When his turn came, Matt read with great expression: there it was, for all of us to experience: his disappointment, anger, resignation, and acceptance.  It took a lot of effort to read this piece – his reddened face and quavering voice gave him away.  But, his classmates listened, and then clapped appreciatively. “That was awesome, Matt!”  “I really got what you were feeling!”

They liked his story, but they really liked this window into Matt – their silent, often glum and impassive classmate.  And Matt looked exhausted by the effort, but elated.  He looked over my way and smiled.  In that moment, I remembered Debbie Nichols.  Matt had become, finally, the mother of his story.   He had taken ownership…at last.

← In Your Own Words
The Importance of Sharing →

11 thoughts on “In my writing workshop: a student takes ownership”