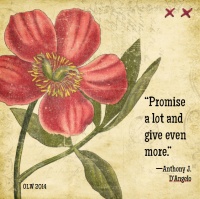 Not so long ago there was a 12 month-old girl who said just two words, “hi” and “bye.”  Without warning, those two words disappeared and she said no words at all.  Her parents worried she might have hearing loss so they took her to an audiologist.  The hearing tests revealed chronic fluid in her ears. Her parents scheduled ear tube surgery. A month passed and the little girl’s vocabulary did not improve. The little girl’s speech therapist had a candid conversation with the child’s parents.  She suggested they see a speech-language pathologist who specialized in Childhood Apraxia of Speech, or CAS.  The parents made an appointment and tried to remain hopeful while they waited.

Time passed and the little girl was diagnosed with CAS.  While it wasn’t a diagnosis the parents hoped for, they felt a strange sense of relief once there was a name for what their daughter had.

In the months that followed, a team of therapists worked together to put a plan in place to help the little girl communicate.  The little girl did speech therapy three times a week and occupational and music therapies once a week. Initially progress was slow, but the little girl began to say words. Her parents used sign language to help her sequence words so she could build simple phrases and short sentences.  Over time, the little girl’s parents began to decode more of her language, which helped her to be understood at home.

As much as I’d like to say the above story is about someone else’s life, it’s not. Research CAS and you’ll learn it’s a motor speech disorder, not a life-threatening disease. I am thankful my daughter is otherwise healthy. However, speech therapy sessions can be grueling. It’s difficult to go from mommy to speech therapist and back to mommy again multiple times a day.  But, this is life as I know it right now, and that is okay because my daughter is responding to therapy and is making progress.

This-coming year, the One Little Word that will guide me is PROMISE. Here’s why:

I promise to persist. There are no “days off” when a child has CAS.

I promise to make home-practice as play-based as possible.

I promise to remember I’m not just a mommy, but a wife, daughter, and friend.  Therefore, I will nurture those relationships as well.

I promise to have fun even when the to-do list is long.

I promise to be optimistic if there are setbacks.

I promise to make time for other endeavors. I will continue to write and consult. I will try to do something artistic since it’s been too long since I’ve done something creative.

I’ve written about speech-related issues with my daughter on my personal blog, Raising a Literate Human, but I’ve never written about the CAS diagnosis until now. I haven’t been sure I wanted to share something so personal in a public forum. However, in the past year, I’ve learned several important things that are helping me become a better parent, educator, and person. I’ve begun developing what I have learned into a set of maxims I felt belonged out in the world.

So yes, my One Little Word for this year is promise. Thanks to early interventions, a great team of service providers, and the Kaufman Speech to Language Protocol, my daughter is at-promise to succeed. She works hard during her therapy appointments to increase her speech productions. I weave home-practice into play and daily routines.  I also make time to head outdoors, sing silly songs, and have dance parties. Each time my daughter adds another word to her repertoire, I celebrate. I’ve lost count of how many words she speaks, which means her language is developing nicely. While not everyone understands her words, our family does and that’s what matters the most. In time, other people will understand her too.

I look forward to 2014 being a promising year for my family, and to the promise of a bright, loquacious future for my daughter.

I am a literacy consultant who focuses on writing workshop. I've been working with K-6 teachers and students since 2009. Prior to that, I was a fourth and fifth-grade teacher in New York City and Rhode Island. I'm the author of Craft Moves (Stenhouse Publishers, 2016) and the co-author of Jump Into Writing (Zaner-Bloser, 2021), Welcome to Writing Workshop (Stenhouse Publishers, 2019), and Day By Day (Stenhouse, 2010). I live in Central Pennsylvania with my husband and children. In my free time, I enjoy swimming, doing Pilates, cooking, baking, making ice cream, and reading novels. View all posts by Stacey Shubitz

Scaffolding Language in a Writing Workshop: A Tip for Tomorrow from Amy - Two Writing Teachers Podcast