Turn off screens and LIVE life. 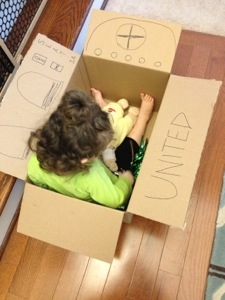 One afternoon, my daughter woke up cranky from a nap so I created a plane for for her out of a shipping box that had just arrived. She co-piloted the jet with one of my old Cabbage Patch Kids. I pretended to be an air traffic controller using sparkly pom-poms. This never would’ve happened if I switched on the TV to get rid of her bad mood.

I’ve become a little too connected in recent years. I became an e-mail addict freshman year of college. I got a cell phone right after September 11th. An iTouch came into my life in 2008, followed by an iPhone in late 2011. Recently, I added an iPad to the mix. That’s a lot of technology! As a result, I put limits on my technology use:

Screen-Free Week goes from Monday, April 29th – Sunday, May 5th. While it might seem drastic and unfeasible to completely unplug, think about what steps you can take to be less connected next week (i.e., to just use the computer for work-related purposes). Turn-off the TV to read or write. Step away from the computer and get outdoors. Power-down your tablet and draw. The possibilities are endless!

3 thoughts on “Turn off screens and LIVE life.”