Recently, I taught a minilesson about showing a story. In typical intermediate grade fashion, students were writing stories filled with struggles, but slim on creating a picture in the reader’s mind. My minilesson went like this (and, yes, it was less than 15 minutes!):

Share this chart – all of which we’ve discussed in previous lessons. 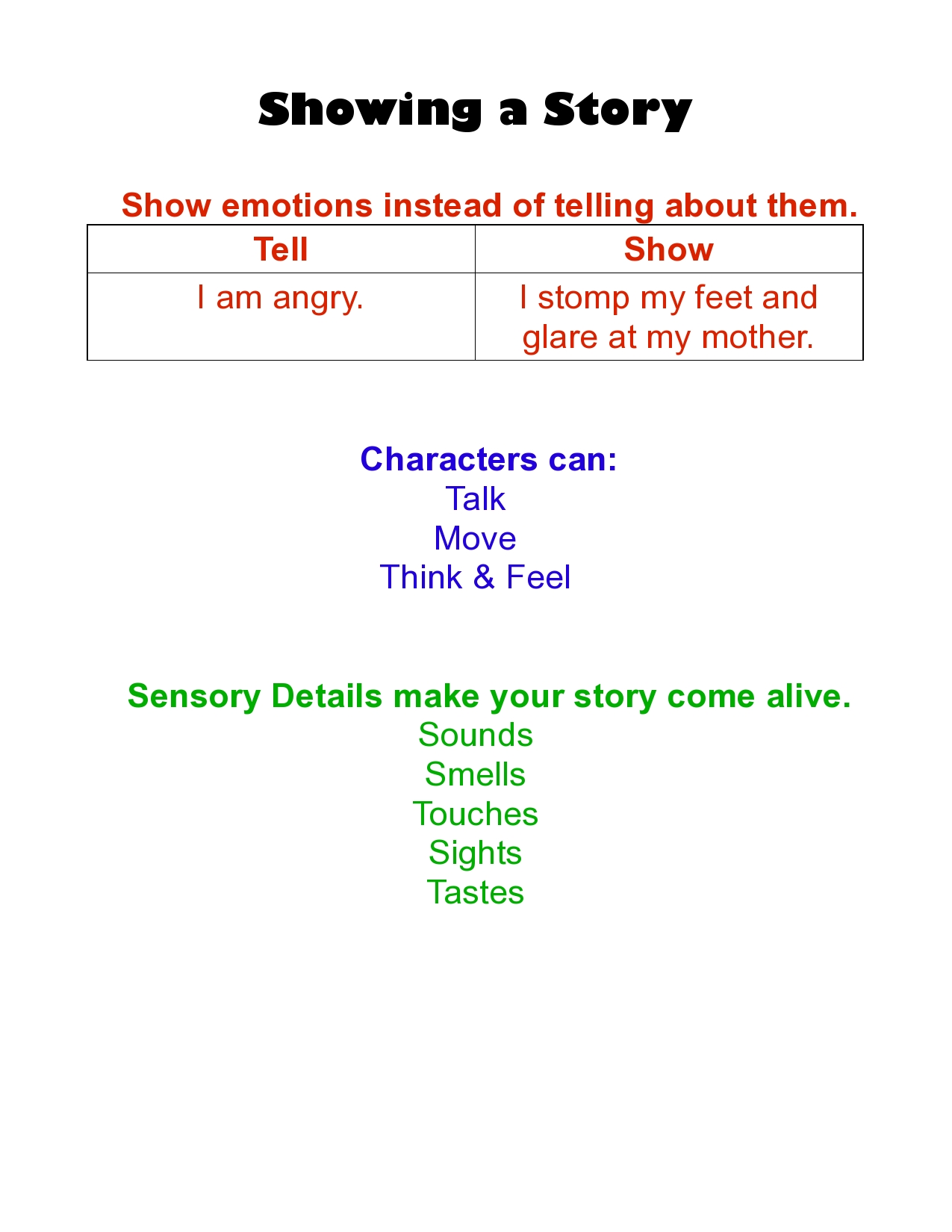 Talked about my work as a writer to make a story come alive. “It’s about slowing down and thinking through the best way to craft a scene,” I said with a smile.

Shared my notebook entry where I tried to come up with ways to show Em’s indifference and Dad’s hope. I continued to talk about being intentional about showing the story. “It takes time and dedication to show a story instead of telling a story,” I said.

Shared a bit of my writing where I crafted a scene by showing the story to the reader.

During work time some students began writing their first story, others planned and drafted a second or third story, others revised, one abandoned a draft and started a new one. I love it when workshop pans out this way and everyone is doing what matters most to them as writers.

At the end students shared the way they showed their stories instead of told their stories. It was exciting to see tracks of my teaching in their writing. Check out some of their words (Since I’m typing instead of sharing the images with you I kept the spelling and punctuation as close to the original as possible.):

Ben drafted his lead to a historical thriller:

Then without warning . . . an explosion blew off the bow the ship started to take on water. The crew then realizes theirs no lifeboats. Just then the ship JOLTED to the side. The stern lifted out of the water and turned it settled back in the water and was gone.

Should I be crying by now or whaite intell I get beat up? I shour hope I sit by Isabell she’s the most poplar girl in school.

The museum tour is okay thinks Mike but when they go to the gift shop Mike Tom puts a fake snake on Mike and Mike screams.

After the tour all the kids run to the gift shop. When Mike finally gets in the door he sees a desplay of lego sets his favorite. Mike is crouched down when all of a sudden he feels something on his back. Mike turns his head to look at his back and sees a snake.  Mike jumps up and the snake flys off. Tom and his friends are roaring with laughter. While Mike is sprinting around like crazy. Finally Mike stops and hears Tom whisper”It was a fake.” When Mike hears this his face turns tomato red. After that Mike stayed away from Tom and his group.

Reflecting on this lesson, I think the reason it was so powerful was because I talked with them as a writer of fiction. I’ve engaged in this work and shared my process with them. As writing teachers, it is essential that we are writing alongside of our students. It is great to use published authors as mentors, but in the end as teachers, we are the living-breathing writers in the room. We ought to be doing the same things as we ask of our students so we can share with them a bit of “insider’s knowledge.”

Unhurried. Finding the magic in the middle of living. Capturing a life of ridiculous grace + raw stories.

After having spent a lot of time physically distancing ourselves from one another, we’re finding ways to gather a bit more closely again. Writing clubs are a way to bring students back together, honor student choice, and strengthen a classroom writing community.
Fellow Educators: I know you feel furious and despondent. I do too. This is going to be a long fight, but there are things each of us can do. Now is the time to get loud and stay involved. I hope you’ll join me.
Today’s post from @nqarooni :
Today’s post from @lainlev “We CAN re-align our moral compass with student instruction. We CAN commit ourselves to being sincerely, wholeheartedly, a community of learners.