Each day, we begin our writing workshop with a five minute quick write. When we first began this five minute practice, I did everything I could to encourage students to just keep writing. It wasn’t easy. I often heard phrases that I knew only stifled writers, phrases like: 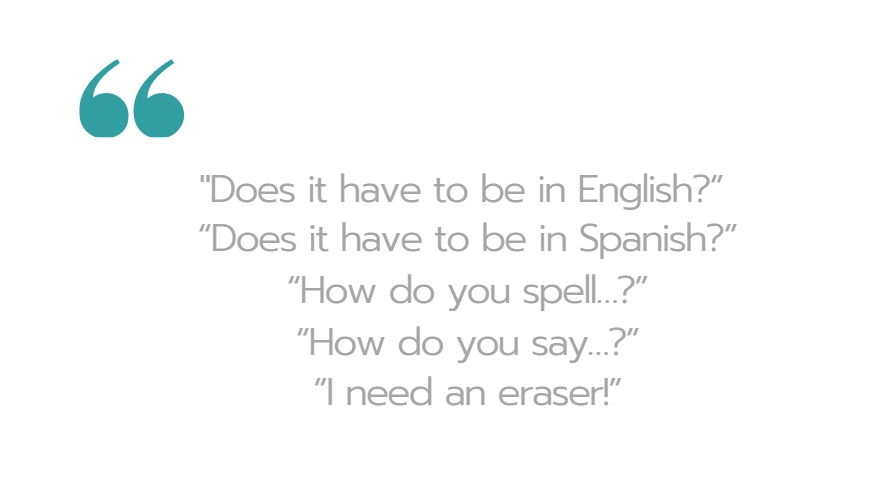 All I wanted was for their pencils to keep moving, for the writing to flow without stopping. For a short while, that proved to be difficult, but not impossible. My students needed to know that it was okay to collect in a notebook in any and every language they needed to pull from; they didn’t need to worry about spelling when collecting in their notebooks; and they needed to understand why it was important to keep what they collected in the notebook. No need for erasers.

Learning to immerse themselves in the writing would help them take on any future writing challenge, including testing.

In a few weeks, we will be taking the fourth grade, State of Texas Assessments and Academic Readiness (STAAR) Writing test. Testing is serious business, but there is no need to sacrifice growing life-long writers. When we focus on cultivating students who discover their voice, embrace their identities, and live like writers, they will thrive and grow beyond the limits of a test.

After many years of teaching writers in English and Spanish, I have learned:

In an article published by EAL Journal, originally shared in a beautiful post by Kelsey Corter back in 2018, translanguaging is described as, “the use of different languages together.” As well as, “the act performed by bilinguals of accessing different linguistic features or various modes of what are described as autonomous languages, in order to maximize communicative potential.” Ofelia García (2009: 140)

Translanguaging is not a bad word. Mixing languages, in order to accomplish communication, is a powerful and resourceful act. When students embrace all of their language resources and they understand that language is malleable, they gain the power of communication and learn to take agency in deciding appropriate languages for specific audiences.

The word translanguaging may be new to some teachers, but translanguaging is not an uncommon phenomenon among EALs. Some EAL students naturally separate languages and other students naturally interlinked languages. In a dual language classroom, where we focus on a different language each week, it is important to create a variety of authentic writing experiences. Authentic and meaningful writing experiences help EAL students keep a discovery mindset and inquiry becomes a natural part of the learning process.

In my dual language classroom, I have noticed that translanguaging seems to happen more often with native English speaking students than native Spanish speaking students. In the sample below, the student practiced writing without breaking her flow. As she writes in one language, she will use some words in another language. This prevents interruption of ideas. Circling the words she used in a different language is a common strategy used by EAL students in our classroom. Students are invited to write in one language, but encouraged to use whatever language they need to pull on to communicate their ideas well. If she chooses to take one piece through the writing process and publish, she is the one who decides the language or languages appropriate for her audience. 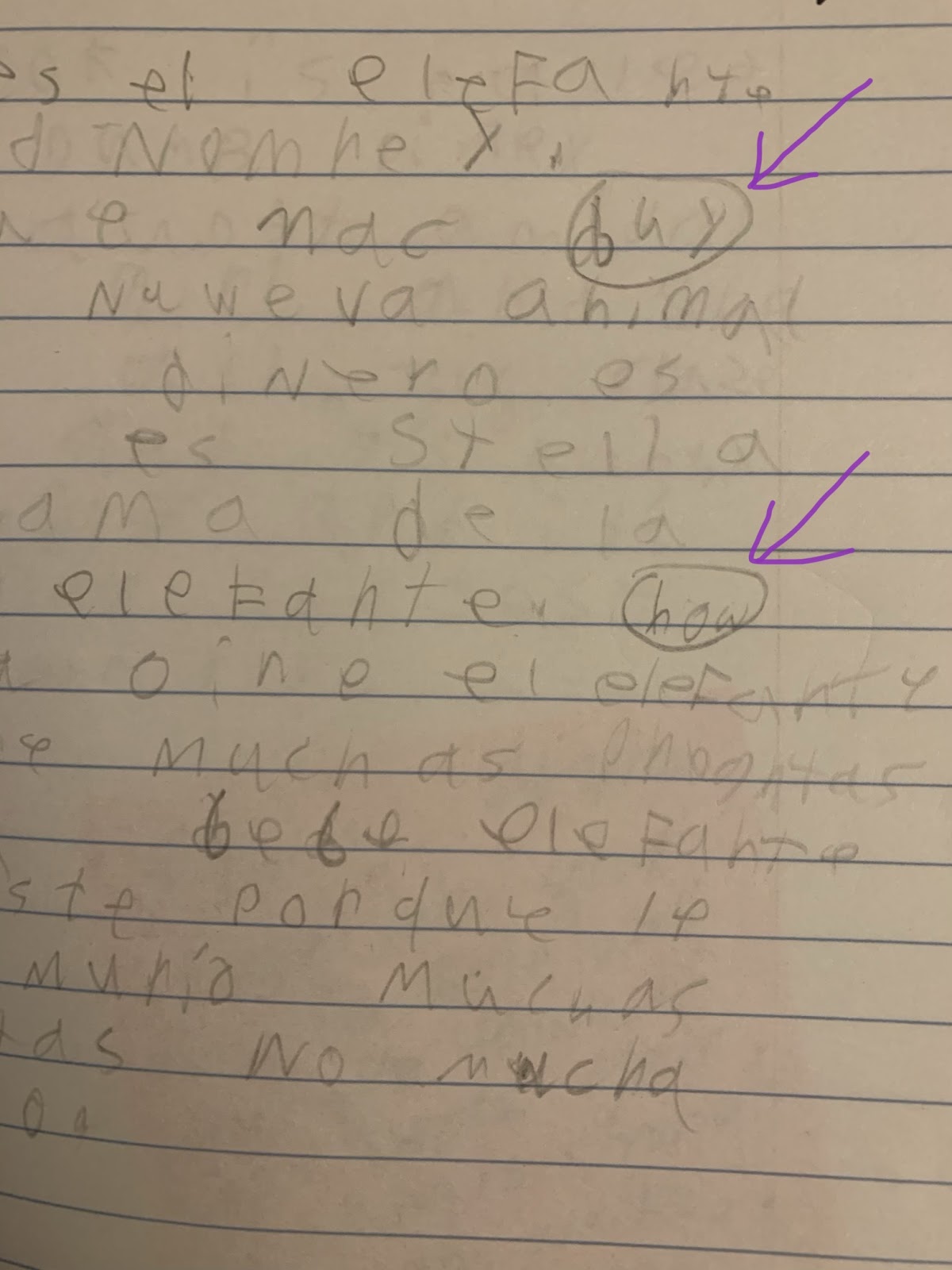 It is such a beautiful writerly move, when students decide to integrate languages. Integrating languages with specific words or phrases is a writer’s craft choice. Generating and keeping several drafts allows students to pull and work on crafting a piece in the language they choose will best fits their audience. Sometimes drafts include a mixture of languages and sometimes they do not.

In my 14 years of experience in a 4th grade dual language classroom, I have not observed sufficient evidence that translanguaging causes language confusion, nor have I observed sufficient evidence that it hinders a student’s testing abilities. However, there exists a strong belief that it does. I have often heard, “they don’t know any language” or “they are confusing languages.” According to linguist, Jim Cummins, “an English language learner needs between 5 and 7 years of assisted English instruction before he or she is ready for the decontextualized academic English needed to be successful in classroom setting and pass most academic tests.” Learning an additional language takes time.

Below are two EAL student writing samples that have been processed and published. In these pieces, there is no evidence that translanguaging confuses the EAL learner. 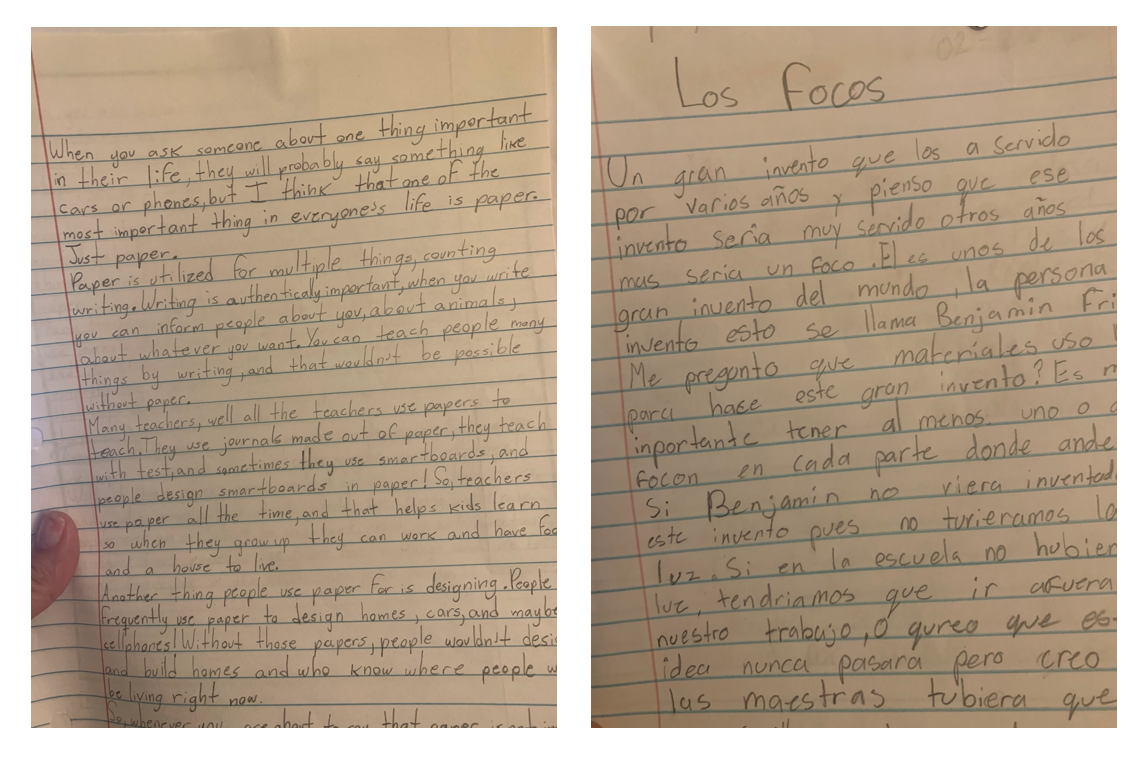 Testing is a genre. It cannot and should not be used to define students as writers.

When students begin translanguaging, for some, it can be an uncomfortable process. I have seen the hesitation and worry in students who may believe they are breaking some kind of unspoken language rule. It is something I noticed only recently, and it feels like somewhere along their learning journey an injustice has taken place.

There is still much work to do to help students see that pulling from their language repertoire is not a deficit, it is a strength that should be utilized in order for EAL learners to acquire language and grow as writers.