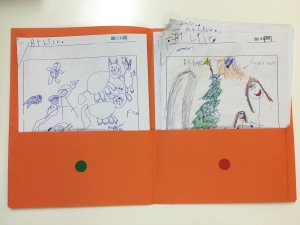 She can stick with a story for months, years even. “Mr. Chipmunk” began as a story we told to get her excited to move to Vermont — four years ago. Years later, he still turns up in her stories. When my daughter was four, she told stories every day with me during the 2014 Slice of Life Challenge, and some of those characters (Goldie, the golden retriever, and Mr. Grey Squirrel especially) are still turning up during family car-rides, at the dinner table, in the bath tub – any chance she gets to tell a story.

She loves to tell and write stores with a lot of elaborate detail. The problem is, she’s six, and it takes a long time to write words when you’re that age. By the time she’s drawn and written just the first part of the story, a week has gone by and she’s starting to get bored with it. Today she told me, in fact, that she doesn’t like writing any more “because of the red dot side of her writing folder.”

“Huh? What’s wrong with the red dot?” I asked her.

“You can only put your story there if it is all the way done, Mom. You can’t start a new one until you finish your old one,” she stated matter-of-factly.

“Well, what’s wrong with that?” I asked her.

“Noo! You don’t understand! You CAN’T. You have to finish the first one.” She rolled her eyes at me. Clearly, this was her final answer, so I dropped it.

Side note: She was right to want to write the whoopie cushion story – she won it at an arcade, a story in itself. She and her two year old brother took turns with it the moment they got home, with hilarious results.

With very good intentions, we teach kids to do their best to finish a story before they move on to the next one. In my own conferring tool-kit I have loads of examples of little charts I use that show kids “How to Know When You’re Done!” or “When You’re Done, You’ve Just Begun!” These charts, and the lessons that go with them, emphasize that children should try to write an entire story from beginning to end before moving on.

Meanwhile, I personally have zillions of bits and pieces of all kinds of writing in various stages. My blogging account is littered with half-finished drafts. I also have a year-old draft of half a chapter book on my computer desktop, and countless unfinished short stories saved in various folders. Not to mention an unfinished, ten-year-old, two hundred page, doctoral dissertation. Speaking as a writer myself, it’s just not true that writers finish one story before they start another. In fact, I don’t know a single writer who really does that.

I’m not saying that young kids should be tossing their work aside the moment a new idea crosses their mind, but a little bit of flexibility will go a long way in increasing engagement, volume, and independence in young writers.

I’ve seen brilliant examples of this kind of flexibility in many classrooms.

These foster a sense of independence and ownership over their writing process without kids feeling trapped in a story they don’t care much about.

Giving kids more choice over when they should (and if they should) finish a story also lifts the level of revision work they will probably do at the end of the unit. I have often found that children who spend a long time on every story tend to struggle with going back for revision–they’ve already put everything they’ve got into the story the first time around. Kids who draft quickly and freely tend to find it easier to revise (not to mention they also tend to have more to choose from when it comes to selecting one thing to publish).

Like anything in writing workshop, these strategies need to be adjusted and individualized through conferring and small group work. The student that flies through pages of paper like there’s no tomorrow could be taught strategies for slowing down and writing a bit more before leaving things behind. The student laboring over each small moment story for days on end could be taught to try out a new story or two when they are feeling stuck.

Now, if you’ll excuse me, I’m off to work on a few of those unfinished drafts I mentioned earlier!

Literacy Coach, Consultant, Author, Graduate Course Instructor, and Mom. Passionate about fostering a love of reading and writing in learners of all ages.

5 thoughts on “Red Dot Side, Green Dot Side, Revisited” Leave a comment ›

Today, in the United States, we commemorate Dr. Martin Luther King, Jr. Day.
Whether you're a seasoned Slicer or you've been thinking about joining the Slice of Life Story Challenge for a while, you'll want to check out today's post about the RESET we're giving the Challenge this year. #SOL22 #TWTBlog
(Re-)Launching Our Writing Workshops With Joy in January
The co-authors and contributing writers from Two Writing Teachers have paused to take a blogging break until January 3rd. We are looking forward to spending the last few days of 2021 renewing and recharging. We've left you with some great resources to discover (or rediscover), which you can access at https://bit.ly/3ph3D7x.