Pens Versus Pencils: Which One is Better for Writing Workshop? 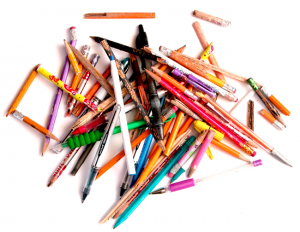 In my line of work as a staff developer, I often get the question, “Which do you think is better? Pens or pencils?”

I have to start by saying that I don’t think that pens versus pencils is a make-it-or-break-it issue. If you feel strongly one way or the other—go for it. It’s probably not the pen or the pencil that will turn this year’s group of students into lovers of writing, creators of poems, stories, reviews, essays, and information books. Rather, it’s you, their teacher who makes the difference!

But, choosing your tools for writing wisely is indeed helpful. Imagine a world where kids do not spend their time erasing, but instead simply draw a line through it and just keep going. Imagine never having to sharpen pencils. Imagine your kids writing twice as much as usual—simply because they have a new pen to write with.

Here are a few issues to consider.

During writing workshop, do you really want kids to be erasing much? Or even at all?  How will you assess all of the work your students have done if they erase half of it? How much time are they spending erasing?  In general, the less experienced the writer, the longer it takes them to erase, even something small. Not only that, but once those letters and words are erased, you’ll never know what changes the child made. You’ll also never know if she was spending all her time writing and then erasing the same words over and over. We’ve all encountered kids who will draw and then erase, and then re-draw the same little stick man over and over again for the entire writing workshop. It’s disheartening to think how much more writing, how much more practice these writers would get if they weren’t spending all their time erasing. With a pen, erasing is not an option. While some kids will balk at first, demanding they get their pencil and eraser back, after a few days, the pen becomes the new normal, and erasing during writing workshop is a thing of the past.

Let’s face it. Keeping pencils sharp is darn near impossible. Yes, there are systems that, in theory, could work. For example, many teachers tell me they keep a can of sharpened pencils at the writing center (or sometimes at each table) so that kids will never be without a sharpened pencil. However, in over a decade of visiting schools all around the country I have met only one teacher who can successfully keep the can of sharpened pencils sharpened, all day, every day (and she is super-human). For the rest of us, halfway through the day there is a shortage of sharp pencils and kids are back to sharpening during work time. And if you are one of those super-human teachers who keeps the pencil can full, well, just imagine all the other things that could be done with the time spent keeping the pencil can sharpened. Sharpening, as we all know, takes time and it’s noisy. Trust me, once you’ve lived in a sharpener-free classroom, you’ll never want to go back!

Kids love pens. I’ve seen the volume of writing in classrooms double or even triple simply by switching from pencils to pens. And then I’ve seen a bump in the volume again mid-year just by switching the color of the pens. New writing tools are interesting and engaging to kids. Who doesn’t love a new notebook, fresh paper, or a new pen? Some teachers even do a little “graduation” from pencils to pens. They have kids sit in a circle, holding their old beat up pencils, and then one by one the teacher goes around the circle, humming “Pomp and Circumstance” as kids plunk their junky old pencils in a can in exchange for a nice new ball point or flair pen.

So, what kind of pens work best? Any kind, really. Simple blue or black ball-point pens can be found in office supply and school supply catalogs—they’re cheap and if you buy a case of them they last all year. Try out a few samples before you order in bulk, though. Certain companies, which will remain nameless, are somewhat notorious for pens that fall apart easily—you don’t want those. If you have a bigger budget, you might consider flair pens instead of ball-point. These are my favorites because they leave a nice, beautiful dark mark on the page. They are like a felt tip marker, but with a harder point so little hands can press hard or hold lightly and still make a nice easy-to-read mark.

You probably do not want to choose pens that click (for the obvious reasons—the sound is so annoying!), and you probably do not want to choose a color that is difficult to read, like pink or orange. You may want to choose something that is the same for the whole class, so that your kids won’t be tempted to squabble over who gets which color. Divide up the pens in cups for each table of kids to share, and you’re ready to go. I prefer having a group of kids share a supply of pens, rather than each individual student having his or her own. This way all I have to do is keep 5-6 cups of pens replenished, rather than attempting to have my 20-something (or sometimes 30-something) students keep track of their individual pens.

Last But Not Least

It’s worth mentioning that very young writers might benefit from using color when they draw. Thin colored markers allow them to draw with detail, while thicker markers or crayons provide other advantages. If you teach emergent writers (who mostly draw during writing workshop) then you might want to stick with something in color while they are in the scribbling stage, until they can draw representationally. Sometimes the only thing that helps kids remember what they drew is the color (as in, the blue reminds them that it was a story about swimming in the water, the red reminds them of the pool toy they were playing with). However, once children are drawing representationally and no longer rely on the color to decipher the meaning of their pictures, you will probably find that they produce much more writing when they are not coloring everything in anymore. Many teachers put away the colored markers and crayons once kids are drawing representationally, and save the color for publishing at the end of a unit of study.

Another thing to consider is that older, more experienced writers are likely to be more fluent writers in general, and may not have any problems with erasing a quick letter or word here and there. If kids are using pencils, you might simply teach them not to spend too much time erasing—just draw a line through it if it’s more than a word or two. If erasing is an issue, some teachers snip the erasers off and provide separate erasers at the times of the day when kids might need them (math, for example). Some teachers use pens during writing workshop, but pencils at other parts of the day.

Ultimately, the decision is yours. To wrap things up, for fun, I hope you’ll participate in this quick little poll!

← All Because We Shared Our Stories
Electronic Writer’s Notebooks →

19 thoughts on “Pens Versus Pencils: Which One is Better for Writing Workshop?”